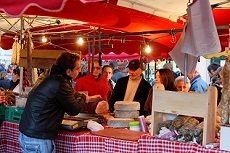 Kick off your stay in Nice with a wander through the pedestrianised Old Town. That's right, ditch the map and simply stroll around this age-old neighbourhood. The French Riviera was Italian territory until the mid 19th century, a history evident in the Old Town's rococo architecture and piazza-like squares. For a peek at Nice's past, stop into the Palais Lascaris(free). This ornate private home was once owned by the Count of Lascaris-Vintimille.

Next, make your way southwards to the cours Saleya. This popular thoroughfare is lined with restaurants and boutiques. However, it's best known for its colourful daily markets. From Tuesday to Sunday, the Marché aux Fleurs (Flower Market, 8am-5pm) occupies the western half of the cours, while the eastern section is piled high with persimmons, foraged mushrooms and other local produce (8am-noon). On Mondays, the entire cours Saleya is given over to the Marché à la Brocante (8am-6pm). This combination antique and flea market draws shoppers from across the region.

During the region's mild winter months, days are crisp, clear and - for the most part - delightfully sunny. Round out your day with an al fresco aperitif in one of Nice's many pavement cafés. A couple of our favourites include the bustling ambiance of Cafe des Fleurs (13 cours Saleya). The sun-dappled tables of place Garibaldi's Café de la Place are of equal allure. 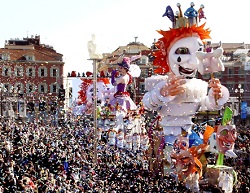 Visitors flock to the South of France to attend the world-renowned Nice Carnival. A vibrant mix of parades, fireworks and outdoor performances, Carnival takes place over the three weeks that precede the start of Lent.

If you're keen to get a head start on the action then peruse the Carnival website before you arrive. Most of the festivities - from flowered floats to twirling dancers - are concentrated along the seafront promenade des Anglais and in place Masséna. Parades are scheduled Tuesdays, Wednesdays, Saturdays and Sundays, and often include special night spectacles. Tickets (10-25) are best purchased in advance. Or pack your kookiest clothes: spectators in fancy dress may join in the festivities for free (place Masséna entrance). 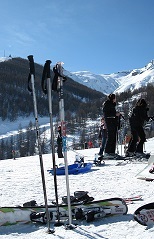 It's time to head to the hills. A wintery mountain landscape may not be immediately associated with the French Riviera. Yet the Maritime Alps are just an hour's bus ride away and host ski resorts aplenty.

Pick of the bunch is Auron. Head to Nice's main train station and hop aboard one of the buses (www.lignesdazur.com, bus number 740, departures 1-3 times daily, 8 day return) that service the slopes. This Alpine resort boasts close to 150km of runs (9 black and 42 in total) and its own snowboard park. Daylong ski passes are priced at 32 for adults, 24.60-27 for children. 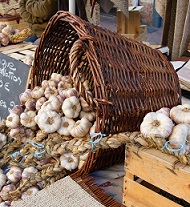 Gather your bounty and make a beeline for place Garibaldi. From here, bus number 81 (www.lignesdazur.com, departures every 30 minutes, 1.50) heads eastwards to St-Jean-Cap-Ferrat.

Not only is the fabulous Cap Ferrat peninsula home to the world's priciest pieds-à-terre (read sumptuous mansions). It also boasts a superb hiking trail. Follow the main road south out of St-Jean town towards Paloma Plage. From this point onwards, the coastal path ripples past sun-splashed bays and rocky outcrops, with plenty of secluded spots en route to enjoy your picnic goodies in the sun. Allow three hours or so to hike the trail in its entirety, finishing at Plage de Passable. There's a bus stop just uphill from here, from which bus number 81 will take you back to Nice.

Did you know that Nice is home to more museums that any city in France outside Paris? Better still, almost all of these museums are entirely free. Our favourites include Cimiez's Musée Matisse, the contemporary MAMAC, and the quirky Musée d'Art Naif Anatole Jakovsky (Château Sainte-Hélène, avenue de Fabron). For dozens of others, check out the Nice Tourist Office website

Fancy getting out of town? Cagnes-sur-Mer's Musée Renoir (19 chemin des Collettes, 6) was freshly renovated in 2013. Renoir's former residence houses an enchanting collection of his paintings and sculptures. The iconic artist's private studio has also been recreated exactly as it existed more than a century ago. The surrounding gardens - dotted with ancient olive trees and a petite citrus orchard - offer panoramic views over the village of Haut-de-Cagnes. Bus number 49 (10 mins, 1.50) links Cagnes-sur-Mer's train station with the Musée Renoir. 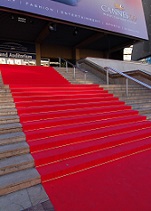 Time your holiday right and you could be in town for the Riviera's heavy hitting annual events. The first is the Cannes Film Festival. Held in mid-May, Hollywood actors and international celebrities descend upon this stretch of sand for ten star-studded days. VIP visitors may be invited to view private films and attend awards events. For the rest of us, there's Cinéma de la Plage. Every evening at 8.30pm, a selection of classic Cannes movies are screened on the beach at Plage Macé (free). 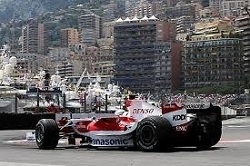 The second big event of the year is the Monaco Grand Prix. The highlight of the F1 calendar, this much-anticipated race takes place over four days in late May, whizzing through Monaco's narrow city streets. Super advance tickets start at 35 each, although most spectators should expect to pay upwards of 70 a head.

The easiest way to spend a day in either Cannes or Monaco is to hop aboard one of the many frequent trains that depart from Nice's main train station every 15 to 30 minutes.

Start your summer holiday off with a bang. There's no livelier time to visit Nice than during the city's annual Jazz Festival. Taking place over five fabulous days in July, the festival has showcased international stars since its inception in 1948. Previous big name performers include Ella Fitzgerald, Dizzy Gillespie and Jimmy Cliff.

Concerts are held in and around Jardin Albert 1er near place Masséna. Tickets (35, early booking discounts available) allow access to all concerts taking place at the festival on a specific evening (usually six sets in total).

After yesterday's late night, there's nothing better than spending a lazy day resting and relaxing on the beach. Nice's 15 private beach clubs all offer mattresses and sunshades for hire (around 15 for the day), as well as restaurants and showers on site.

For a hip ambiance, creative cocktails (try the 'Cointreaupolitan' - Cointreau, cranberry juice and lemon) and contemporary cuisine (such as ceviche, or black coeur de boeuf tomato carpaccio) head to Hi-Beach

Or try your hand at watersports instead. For paddleboarding, kayaking, wakeboarding and parachuting, head to Glisse Evasion at Blue Beach. 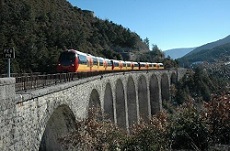 Today it's time to ditch the crowds. Make like a local and hit Marché de la Libération (Tuesday to Sunday, 8am-noon, around avenue Malausséna) for an utterly Niçois breakfast. We love a slice of Kiosque Tintin's (3 rue Charles Péguy) pizza-like onion pissaladière, paired with a shot of eye-opening espresso.

It's an easy stroll over to the Gare de Provence train station (4 bis rue Alfred Binet). From here, four daily Train des Pignes head inland into the hills, leaving the summertime heat back on the coast. This narrow-gauge railway links Nice with Digne-les-Bains via the picturesque mountain village of Entrevaux, and passes carpets of wildflowers and tumbling rivers en route. 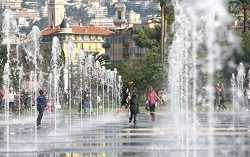 Although easily criss-crossed by public transport, Nice is a delight to explore on foot. In pride of place is Nice's Promenade du Paillon, which opened in late 2013. This city centre park stretches over 1km, from place Garibaldi to the seafront at Jardin Albert I. Look out for shady picnic areas, animal-themed climbing frames and shimmering fountains.

Visit Nice between late June and the end of July, and you'll be in town for the summer sales. Regulated by the French government, they're held just twice per year. Pick up top-quality linens from Galeries Lafayette, or designer bargains from the boutiques that line rue Alphone Karr. 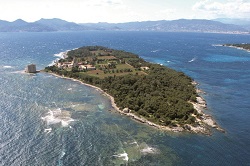 Seeking your own stretch of sand? The Iles des Lérins float just off the coast opposite Cannes. The Man in the Iron Mask was once imprisoned on the larger island of Ile Sainte-Marguerite. The prison - which still includes his cell - is now the island's Musée de la Mer. On tiny Ile Saint-Honorat, a small community of monks cultivate their own vineyards. Island wines are available to purchase in the monastery shop. Perhaps most enticingly, each sun-kissed island is ringed by secluded coves and both are entirely car-free. 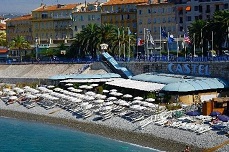 Among Riviera residents, autumn is known as the 'golden season'. The days are long and sunny, the sea is warm and - best of all - the bulk of the tourists have departed. Steep yourself in local life with a lazy, crowd-free lunch at one of Nice's beach restaurants. Fifteen different private beach clubs - each one with its own restaurant and bar - line the city's 5-km seafront sweep. At the easternmost end of the beach, Castel Plage is an A-lister favourite: keep your eyes peeled for the likes of Emma Watson, Keanu Reeves and Niois resident Elton John. 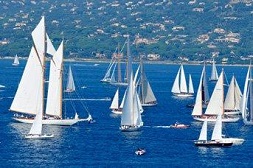 You'll need your own wheels, but an autumnal day exploring St Tropez can't be beat. Time your visit right and you could be in town for legendary yacht race Les Voiles des Saint-Tropez, held in late September or early October. Feeling adventurous? The entire St Tropez peninsula is ringed by a coastal trail. Or trek the 5km-long golden sands of Plage de Pampelonne, splashing your way along this iconic beach instead.

Back in Nice, it's time to immerse yourself in a little culture. Nice boasts more museums than any French city outside of Paris. Which makes it little surprise that the city is also scattered with a fantastic collection of smaller art galleries. Wander through Nice's Old Town, where dozens of showrooms are concentrated in and around rue Droite. Seeking the perfect souvenir? Try Atelier Sylvie T. for atmospheric Riviera watercolours.

Round out the day with an evening at the opera. From September through June, Nice's 19th-century Opéra de Nice stages an exciting line-up of opera, concerts and ballet. Tickets range from 8-78, with weekend matinées priced at just 7. 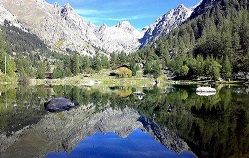 Spilling over six mountainous valleys, the nearby Parc National du Mercantour was part of Italy until 1947. Today this national park measures close to 700km2 - and is criss-crossed by more than 600km of footpaths. Keep an eye out for eagles, chamois and ibex. 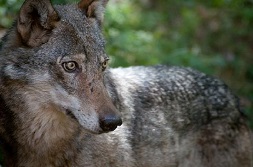 Located in the park's Boréon Valley, the Alpha Wolf Park, 12) is home to three packs of wild wolves. These indigenous animals came close to extinction during the last century. Today, the dedicated nature reserve - dotted with observation huts, child-friendly stop-offs and hiking trails - is committed to restoring the region's predator population.