Nice is the Brighton of the South. It's widely recognised as the most gay-friendly city in France. Its 'mini Marais' district - which centres around place due Pin and rue Bonaparte - is booming with new bars, cafés and clubs. In fact, more than 100 accredited establishments across town promote themselves as officially LGBT-friendly. (Look out for the rainbow-hued "Nice Irisée Naturellement" logo posted near the entrance. Although don't be fooled into thinking that little no name café on the corner isn't just as inviting too.) Top it all off with the fact that - with the exception of Paris - Nice has celebrated more gay marriages than any other city in France, and you're looking at one welcoming city.

Whether it's your first visit to the Riviera, or you're virtually an honorary citizen, Nice is home to gay-friendly venues and annual events to suit all tastes. So on to our favourites.

Red Kafé This funky little bar is one of the best places in town for an apéro. Daily happy hour - often themed, such as their popular 'AperiKitche' - kicks off at 6pm.

Le Bar Butch Tucked into the heart of Nice's Old Town, Le Bar Butch may attract patrons with their heavenly pizza. But you'll soon find yourself staying on for the impromptu post-dinner parties. Evening entertainment ranges from cabaret to drag shows. Le Bar B*tch, just over the road at number 2 rue Rossetti, is equally unconventional.

Malabar Station Ease into this cruising club's rhythm with a sundowner on the see-and-be-seen place du Pin terrace. From 10.30pm it's time to dive inside, where the vibrant venue rocks with top-notch DJs, themed soirees (Ultravoyeur, Dark and Electrosex included) and parties that simmer until late.

Glam Club Whether your passion is disco, pop or house, Glam Club takes the biscuit as the Riviera's hottest club night. International DJS fly in from as far afield as London and New York for truly eclectic evenings, from masked balls to bears' tea parties and 'cardiodancing'.

The Mediterranean shoreline is scattered with private beach clubs, as well as long, wide stretches of public beach. All of them are as welcoming as a glass of rosé on a searing summer day. If you're looking for specifically gay beaches, there are a few sections of coastline that are popular for nude male sunbathing. Try the easternmost strip of Nice's Cap de Nice (after the seafront trail finishes). Artist Jean Cocteau once frequented this very spot. Alternatively, the mostly male nudist beach at Saint-Laurent (between Eze-sur-Mer and Cap d'Ail) is also well known.

Lou Queernaval (February) This year (2015) will see Nice host Lou Queernaval, an offshoot of the city's traditional winter carnival. Claiming proudly to be France's first-ever gay carnival, the event's festivities will kick off on February 27, 2015 at 9pm in place Masséna. Expect exotic floats, dance troops, fantastical creatures, live artists, a King and a Queen, plus plenty of feathers and sequins. The party will continue throughout the following week. Check the Lou Queernaval website for regular updates. 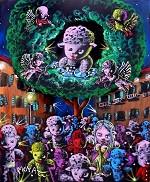 Fete de la Musique's Dolly Street(place du Pin, 21 June) Across all of France, the summer solstice is an all-night celebration of music. Expect a lively band strumming boisterous songs on your street, salsa dancers shimmying around the corner, bars spilling out tunes out onto the pavement, and the odd acoustic guitarist perched on an al-fresco stool. And at the heart of the rue Bonaparte district, Dolly Street manages to up the ante even further. This extravaganza organised by LGBT Côte d'Azur sees go-go dancers and live contemporary art creations rock the square from 6pm until midnight. Dolly Street hosts a similar White Party, also in place du Pin, in mid-August.

Pink Parade(mid July) Like Gay Pride marches across the globe, the South of France's own Pink Parade is a celebration of sexual diversity, gender freedom and a positive promotion of equal rights for everyone. The annual event sets off from Nice's Tête Carrée at 4pm. The 10,000-strong crowd is composed of LGBT and hetero participants, as it winds its way through Nice's city streets for three hours. Recent editions have seen Parvis du Théâtre's C Factory host a Pink Drink from 7pm, followed by a Pink Diner from 10pm, courtesy of Dolly Street in place du Pin. High Club's Pink Party round out the evening, kicking off with DJs and 'night creatures' at midnight. Keep an eye out for other gay-friendly events throughout the same week, including club nights around town and Rainbow Jogging (a one-km run from High Beach to Castel Plage along the promenade).

Rainbow Power Festival, High Club (various dates) Since 2005, regular Rainbow Power club nights have been a French Riviera event in themselves. These themed evenings (jungle, video games, 'scandilicious') take place every Sunday night from mid July to mid August at High Club throughout the summer. Think rhinestones and exploding confetti amid a carnival of noise. During the winter season, Rainbow Power normally holds just one super-night: Gay New Year, on or around New Year's Eve.

ZeFestival (October/November) This LGBT film festival takes place each autumn in ten different venues in Nice, as well as in other towns dotted throughout region, including Cannes and Monaco. The theme of all movies at the festival concerns LGBT and gender issues. The festival draws directors and an audience from around the globe, which means all films are shown in VO ('version originale', or original language) with French subtitles. Associated debates, public exhibitions and concerts also take place around town during the same period.